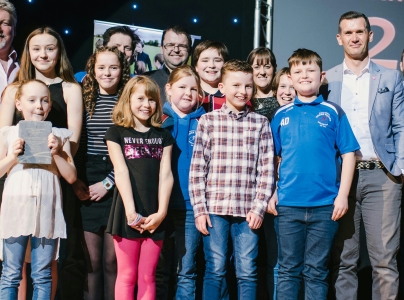 Gower Riders, Swansea’s only youth cycling club is celebrating after being named Junior Sports Club of the Year at the annual Swansea Sports Awards.

The victory comes as a result of the club’s work in providing fun, safe cycling sessions for children. It was also awarded in recognition of a remarkable year for the club which saw young cyclists score many notable victories around the county, including one rider being crowned a double Welsh Champion and another coming out on top of the Welsh Cyclo-cross league. The year also saw six of the club’s youngsters chosen to represent Welsh Cycling on their new Young Ambassadors programme.

The ceremony also saw further success for the club when promising young cyclist, Imogen Morris was named as a runner-up in the Junior Sportswoman of the Year category as a result of her becoming the Welsh Circuit Racing Champion and Welsh Track Champion in the last year.

Speaking at the Brangwyn Hall ceremony, Gower Riders Chairperson, Kath Elias said:
“We’re over the moon to have won this award and was delighted to see kids’ reaction when they were announced as winners. They work so hard week in, week out to improve their cycling skills and be the best that they can be. They thoroughly deserve this award.

“The club’s success is even more remarkable when you consider that there is no dedicated cycling facility in Swansea for the kids to train at. We’re quite a nomadic club and we have to be quite innovative and adaptable when it comes to using whatever venues we happen to have at our disposal. We’re only six years old, so hopefully this award can firmly establish us on the local sporting map and help us grow as a club.”

The award comes at the start of what could be a memorable week for the club. Six of its young riders have also been nominated for an award at the South Wales Evening Post Community Awards. The six have been shortlisted in the Comunity Champions category as a result of the work they do as part of Welsh Cycling’s Young Ambassadors programe, a scheme which encourages young people to volunteer within their clubs and communities and to develop themselves as future leaders both inside and outside the sport. The results of this award will be announced on Friday 22nd March.