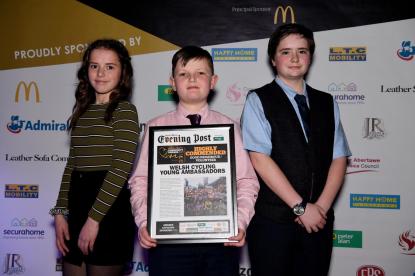 Gower Riders Cycling Club are celebrating after six of their young cyclists were Highly Commended at the South Wales Evening Post Community Awards.

The scheme which was launched last year encourages young cyclists from all over Wales to spend time volunteering within their clubs and the wider community. The programme aims to see the youngsters develop the key skills that will serve them well in the future, both inside and outside the sport.

The ambassadors work has included assisting club coaches at training sessions, helping to stage the club’s round of Welsh Cyclo-cross league and taking a leading role in organising the club’s annual awards night. Additionally, some ambassadors have given talks and demonstrations to community groups to promote both the club and the sport in general.

Speaking at the presentation ceremony, one of the Young Ambassadors, Ben Fox said:
“I really enjoy being part of the Young Ambassadors scheme, particularly helping the coaches at sessions and encouraging the younger members of the club to improve their cycling skills. It’s a great scheme that has helped me gain a lot of confidence and learn new skills. Receiving this award is the icing on the cake.”

Kath Elias, Chairperson at Gower Riders said:
“We are really proud of how our Young Ambassadors have taken to their roles. They are a very enthusiastic group of kids who are passionate about helping to run the club, encouraging the younger riders to improve their skills and promoting the sport in general.

“It’s been really pleasing to see how they’ve grown as people and the confidence they’ve gained by being part of this programme. The skills they are developing will serve them and the club well in years to come. They are superb role models and are a credit to the club.”

The award caps a memorable couple of weeks for the club. Just two weeks ago they were victorious in the Swansea Sports Awards, being named Junior Sports Team of the Year. They were also named Welsh Cycling’s Club of the Month for March, thanks to the work of the Young Ambassadors and the club’s role in encouraging their participation.